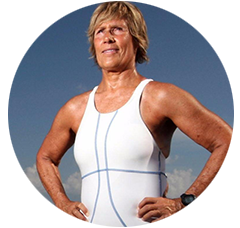 American author, journalist, motivational speaker, and long-distance swimmer-Nyad gained national attention in 1975 when she swam around Manhattan (28 mi or 45 km) and in 1979 when she swam from North Bimini, The Bahamas, to Juno Beach, Florida (102 mi (164 km)). In 2013, on her fifth attempt and at age 64, she became the first person confirmed to swim from Cuba to Florida without the aid of a shark cage, swimming from Havana to Key West (110 mi or 180 km). Nyad was also once ranked thirteenth among US women squash players.