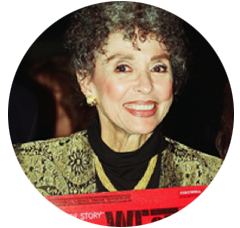 Puerto Rican actress, dancer and singer (present day). her career spanned over 70 years one of the few artists[1] to have won all four major annual American entertainment awards: an Oscar, an Emmy, a Grammy and a Tony.[2] She is also one of 23 people who have achieved what is called the Triple Crown of Acting, with individual competitive Academy, Emmy and Tony awards for acting; she and Helen Hayes are the only two who have achieved both distinctions.