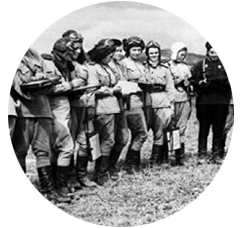 German nickname for the Russian female military aviators of the 588th Night Bomber Regiment. The regiment flew harassment bombing and precision bombing missions against the German military from 1942 until the end of the war. It was the most highly decorated female unit in the Soviet Air Force, with many pilots having flown over 800 missions by the end of the war and twenty-three having been awarded the Hero of the Soviet Union title. Thirty-two of its members died in the war.